Mr B had heard of the Warmer Homes Scotland scheme through TV adverts, and decided to do some internet research to find out what help was available. His home was built in the late 1930s, with a very poor energy rating and an inefficient old heating system. He also had an oil boiler, which meant he was using kerosene oil to heat his home, and he wanted to find a way to move away from his existing system.

“I took into account the environmental impacts of having kerosene fuel transported to my address.”

Mr B applied to the Warmer Homes Scotland scheme just before Christmas 2020. He wanted to find out what support was available to install a more energy-efficient way of heating and providing hot water for his home. After his application was completed, a survey was carried out. This survey found that Mr B’s home was inefficient and wasn’t fully heating several areas of his home. Shortly afterwards, a technical survey was completed by BRB Heating, which determined that he should have an air source heat pump and radiators installed, as well as a smoke alarm and carbon monoxide detectors.

“The installation was carried out much sooner than expected, during February 2021. Incredibly, the application was only submitted several weeks before to Warmer Homes Scotland. To my amazement, it only took one and a half days. Thankfully, this was quick as the installation took place during one of the coldest periods of the winter.”

These measures were all installed without any cost to Mr B.

“With the assistance of the Warmer Homes Scotland team, I was surprised to learn that I did not have to contribute. Initially, I was enquiring about help to finance a new heating system for my home.”

With the measures now installed in his home, Mr B now says that he is already noticing the difference they are making.

“There is a big, noticeable improvement with my home being warmer. I have more peace of mind that the heating system which was installed is the best and most efficient green energy heating system available. I now have constant hot water, which is something I did not have before.”

For more information about Warmer Homes Scotland or to make an application, customers can contact Home Energy Scotland free on 0808 808 2282.

Download our 2020/21 Customer Stories Booklet to read about our customers who have benefited from the Warmer Homes Scotland scheme. 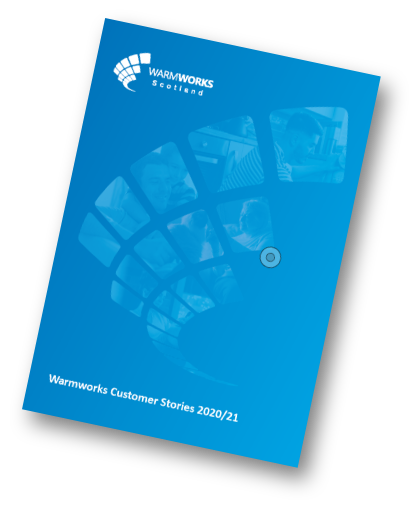